As the peloton failed to get organised, the pair attacked their breakaway companions with 10 kilometres remaining on the 161km GoFish Nagambie Stage 3 from Sale to Warragul.

“Buzzing actually, yes first professional win, it’s been a little while since I’ve had a win on the road so to do it at the start of the year in a nice race in good weather, couldn’t be happier,” said Doull who is a Team Pursuit Olympic Champion.

“We’d earmarked today’s stage as a potential day for the break to go. We were both pretty keen, myself and Luke [Rowe] made sure we lost time yesterday so the break could get a bit of rope out on the road … it came around perfectly for us with the two of us being away with five kilometres to go and then Luke the gentlemen said to me you know, you can have it, so I was more than happy to take it so I had a great day.

“This is my first professional win on the road, obviously I’ve won bigger stuff before like the Olympics but that’s on the track, it’s almost like a different sport in a way, the road, it’s been a little while since I’ve won stuff one the road so it’s nice to get the hands in the air at last for the first pro win.”

It was a fast start to the race, taking over 40kilometres before the day’s breakaway finally established.

A crash on the outskirts of Sale brought down several riders and resulted in newly crowned Australian Road Race Champion Michael Freiberg (Sunshine Coast ACA) being forced out of the race with grazing and bruising to his face. 18-year-old Carter Turnball (KordaMentha) also required medical attention and was forced to abandon the Tour.

Within sight of the finish line, the two Sky riders in the breakaway exerted their WorldTour muscle and stormed clear. The British team-mates completed the 1-2, with regular workhorse Doull taking the honours in front of an applauding team-mate Rowe.

Ballarat’s Liam White (Drapac-Cannondale) was 29 seconds behind the pair to claim third.

“Definitely a stressful day, we had some crashes at the beginning almost got caught behind one, but my team was fantastic all day. Rode in control, smart, and I could really lean on them they kept me calm,” said Woods.

“We did a great job of controlling that everybody who was up the road was eight minutes or more down on the GC and we just made sure we kept the gap down around four or five minutes and brought it down to three, then Mitchelton-SCOTT took over but they weren’t able to bring it back totally, which worked great in our favour that it wasn’t very stressful for the finish and I could roll in and feel good for tomorrow.” 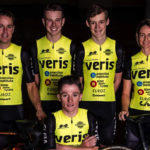 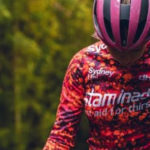