EF Education First hand out a lesson at the Island

“I’ve been coming up against a brick wall for the last week in Down Under, but I think … having a bit of form and I have to thank the boys for their excellent job Mitch Docker and Tom Scully held the wind around the last corner at speed I just had to hang on for the line. Just really happy to get the season off the ground.”

“I didn’t get the ball rolling on stage one in Down Under, GC was the focus, I still got my chances but things didn’t come off, it’s a little bit lower level but at the same time I think I’ve soaked up the racing so I’m ready to go.”

“I still feel like I’ve got a lot to give and I’m pretty quick I think I need to get the head in the right place, which I think it is now and maybe my biggest problem  is not really finishing speed, you know that being in the red five or 10 minutes before and how much legs I’ve got left and some of that’s a mental thing as well believing you can sprint when you’re a bit cooked so… I think the win helps and you just hope it gets the ball rolling.”

“This season is obviously pretty important I’m not a spring chicken anymore it’s time to get things rolling and it’s not for lack of trying or lack of motivation but, it’s not easy to win bike races anymore, oh it was never in the start in the first place but you look out and reel off a list of sprinters now there’s’ like 15 sprinters who are bloody quick.”

It wasn’t much of a 34th birthday celebration for Trek-Segafredo superstar Richie PORTE who finished 11th on the sheet, and will be looking to make his mark later in the week.

Earlier in the day, three young riders spent most of the afternoon up to 3 minutes off the front of the peloton. Ayden TOOVEY (Team Bridgelane) won Bicycle Beer most aggressive for his part in the breakaway trio, with Karl MICHELIN-BEARD (Olivers Real Food) and Dylan NEWBERY (Maxxis Pro) part of the triple act. 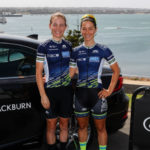